Testing and Continuous Integration for Python packages with GitHub Actions

This is part 7 in the Creating an open source Python project from scratch series. If you haven’t read the previous parts you may want to go back and check those out.

In this post we will cover automatically running our tests when we push new code to GitHub, and when contributors raise Pull Requests against our project.

Continuous Integration (CI) is an automated process which checks whether a contribution to a codebase meets all the criteria set out by the maintainers in order for it to be merged.

As the maintainer of our example is-number package we want folks to contribute to the project, but we need to check that their contribution doesn’t break anything or made the codebase worse in any way. So let’s set up some CI with GitHub Actions to run our tests and other checks whenever someone submits a Pull Request to the project.

GitHub Actions is a CI service, there are many out there. With Actions we can add some configuration to our codebase which will result in checks being run automatically on our repository. These checks are executed by runners which will run our workflows which are each made up of a series of steps.

Each of these things is highly configurable so it may be useful to refer to the GitHub Actions Documentation as we go.

Let’s create our first workflow. In previous posts we spent time getting ourselves set up with pytest to test our code. With GitHub Actions we can automatically run pytest on each proposed change.

We probably also want to run this workflow a few times with different configuration options to ensure things will work for a variety of users. For example we probably want to use a runner for each operating system we support.

Given our project is simple and written in pure Python we should be able to easily support Linux, Windows and macOS, so let’s have a runner for each of those.

We should also check each Python version we support. It is up to you which version you support. I personally tend to refer to NEP29 which recommends supporting all Python versions released in the last 42 months. At the time of writing that is 3.7, 3.8 and 3.9. So let’s run tests for each of these.

Here’s an example workflow file which works through the steps we listed above.

We start by giving our workflow a name and configuring when this workflow will run. GitHub Actions has a variety of options for triggering your workflow. Here we’ve chosen pull_request so that we test submissions from contributors, push so we test our repo after submissions have been merged and workflow_dispatch which allows us to manually trigger the workflow from the GUI too.

Next we have our jobs. We only have one job for now called test. Here we configure our test matrix, which specifies all the combinations of operating system and Python versions to use. We also set the runner’s operating system version.

Then we move on to our steps. Steps can be pre-packaged actions which you can find on the GitHub marketplace or bash scripts. Our first two step are official actions to check out our code and install Python.

Then we have two custom bash scripts, one to install our package and another to run pytest.

If we commit this config and push it up to GitHub we should be able to see things run under the Actions tab in our repository. 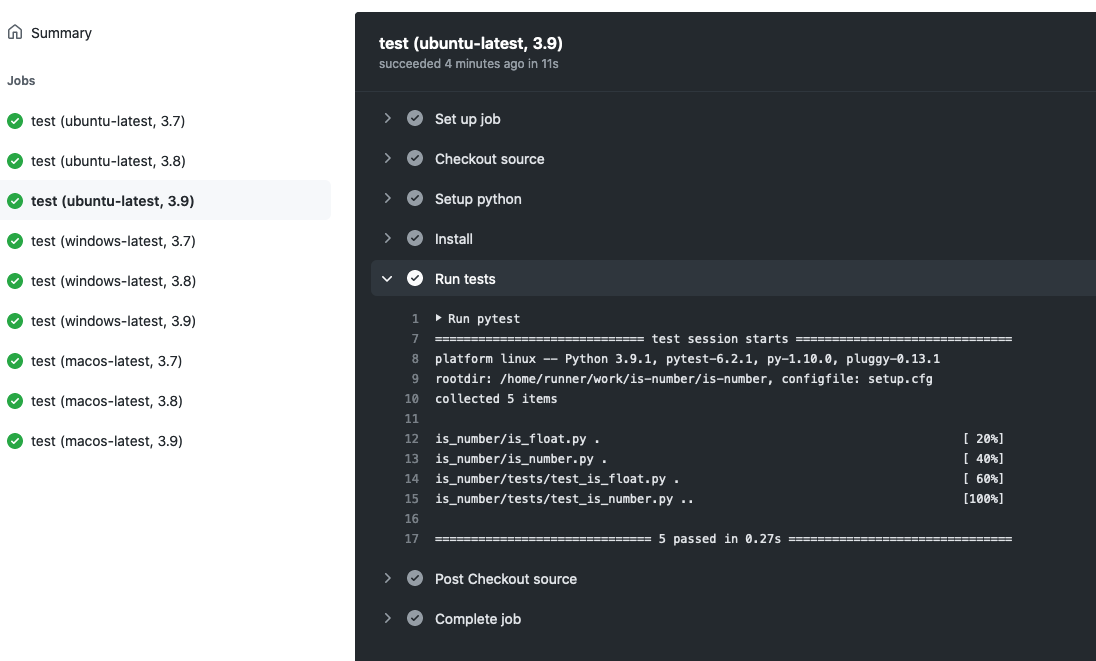 Now whenever someone makes a Pull Request against our repo these checks will run to ensure that the tests still pass in their version. 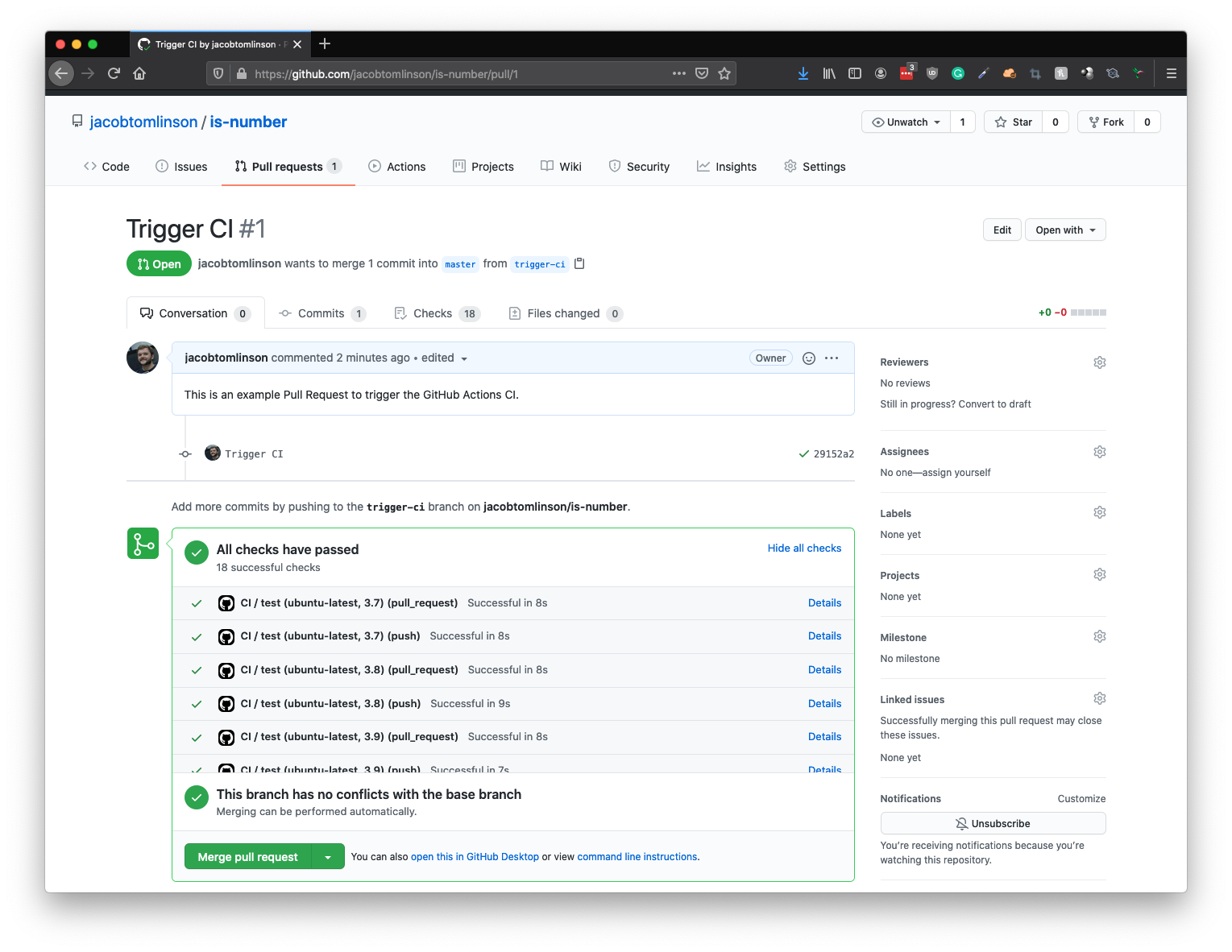 In a previous post in this series we ran Black on our code to give it some consistent formatting. I have my editor set up to run Black on a file whenever I save it, but you can’t ensure all of your contributors will do the same. So let’s add another check which ensures our code meets our desired styling.

We could add a check to our CI which runs black --check . which would test whether Black would make any changes to our files. But there is nothing more frustrating than pushing up a Pull Request to later find out that you forgot to run Black. To save ourselves from this we are going to set up some git pre commit hooks, and also use them for testing in our CI.

Git has some functionality which allows you to run scripts at various stages of your workflow. You can set these up yourself, or you can use the handy pre-commit framework to do it for you.

Next let’s add some pre-commit config in a file called .pre-commit-config.yaml.

We are configuring two hooks, black and flake8.

We also need to add a little config for flake8 to our setup.cfg file to ignore.

Now we need to install these hooks.

Every time we use git commit our project will be tested with these tools and our commit will be rejected if either of them fails.

We can check everything works correctly by running pre-commit manually.

Oops it looks like my edit hadn’t been running black automatically, so pre-commit formatted a couple of files. Let’s commit those.

We can see that on each commit our hooks are called and checked.

Each developer will need to install pre-commit and the hooks in their local environment. So we should add a CI check to ensure the hooks pass, and also add a section to the README.rst telling them how to set it up.

Let’s start with the README. Let’s add a section along the lines of the following. I’m putting this above the Testing header that we added previously.

We can add another workflow file for GitHub Actions. Let’s call it .github/workflows/pre-commit.yaml.

We only care about our linting and formatting here, so we don’t need to run on multiple operating systems or Python versions. We just grab our code and use the official pre-commit action to check our hooks pass.

Let’s add this new workflow, push it to GitHub and watch it run. 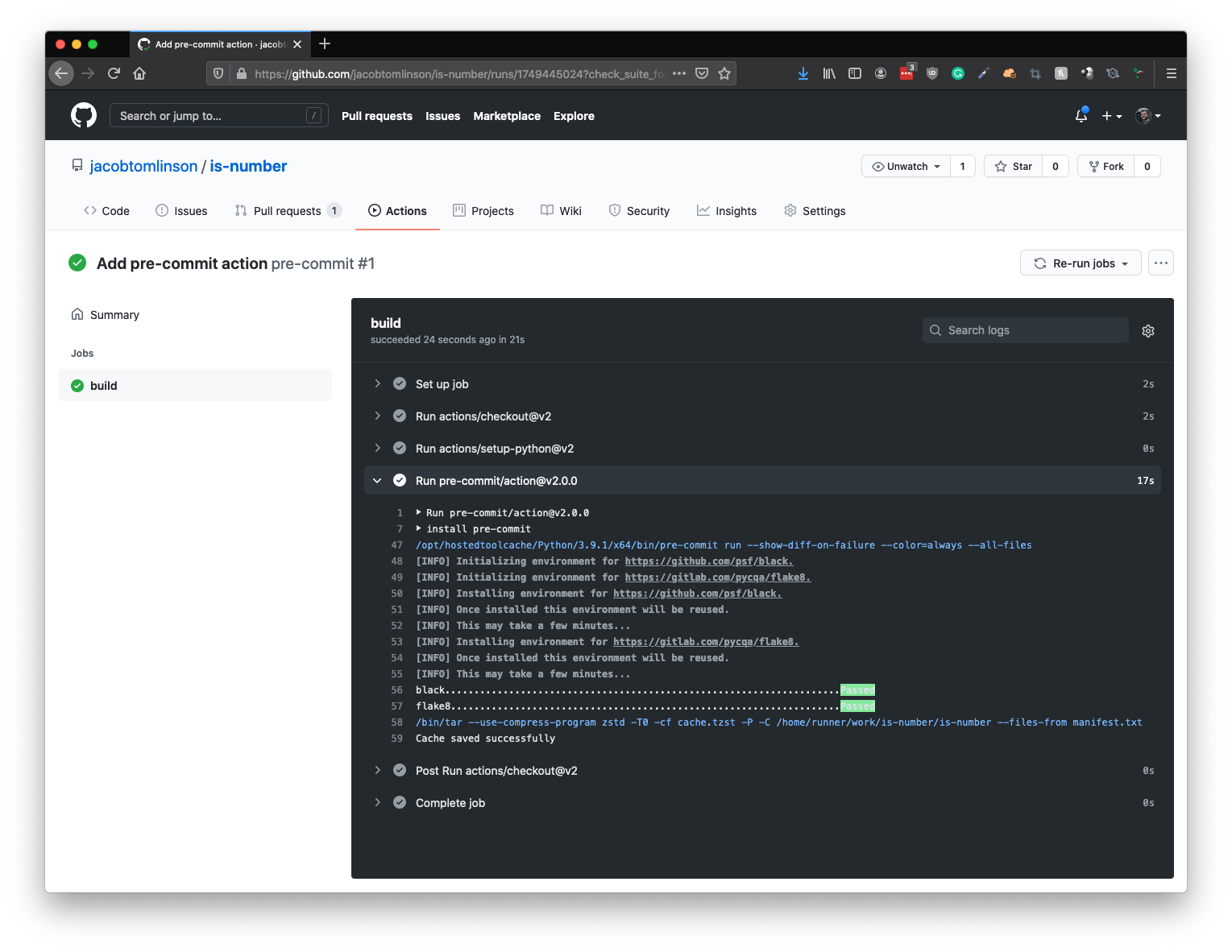 One last thing we can test as part of our CI is code coverage.

Code coverage is a measure of the number of lines of code that were executed by your tests. In theory we want every line of our code to be tested at least once, if not more. Just because a line is covered doesn’t mean it is well tested, but it’s a start. I’ve worked on projects in the past with 100% test coverage, but most of the tests were garbage designed to hit the lines.

But test coverage can be really useful to see what areas of your project could do with more testing. Seeing coverage trending upwards over time is also a good measure on the health of your tests.

As we are using pytest for our testing we need to add the coverage plugin. So add pytest-cov to your requirements_test.txt file and update your dependencies.

We also need to tell coverage to measure code in the current directory. We can do this in the pytest section of our setup.cfg.

To configure our coverage reports we need to create a new file called .coveragerc. For now we will just omit some files that we don’t want to test coverage on, including versioneer and our setup.py.

Now if we run pytest again we should see a .coverage file appear in our project directory. This will already be included in your .gitignore if you are following along with the series. This file contains a list of the lines that were tested.

The last thing we need to do is have our CI push our coverage report somewhere we can view it. For this we are going to use Codecov.

Codecov have an official GitHub Action so open up your .github/workflows/ci.yaml file and add one more step to the end.

Now we can commit this and push it up to see things in action.

Then once the Action has completed you can head to Codecov and log in with Your GitHub account. From there you should be able to navigate to your project and view your coverage report. 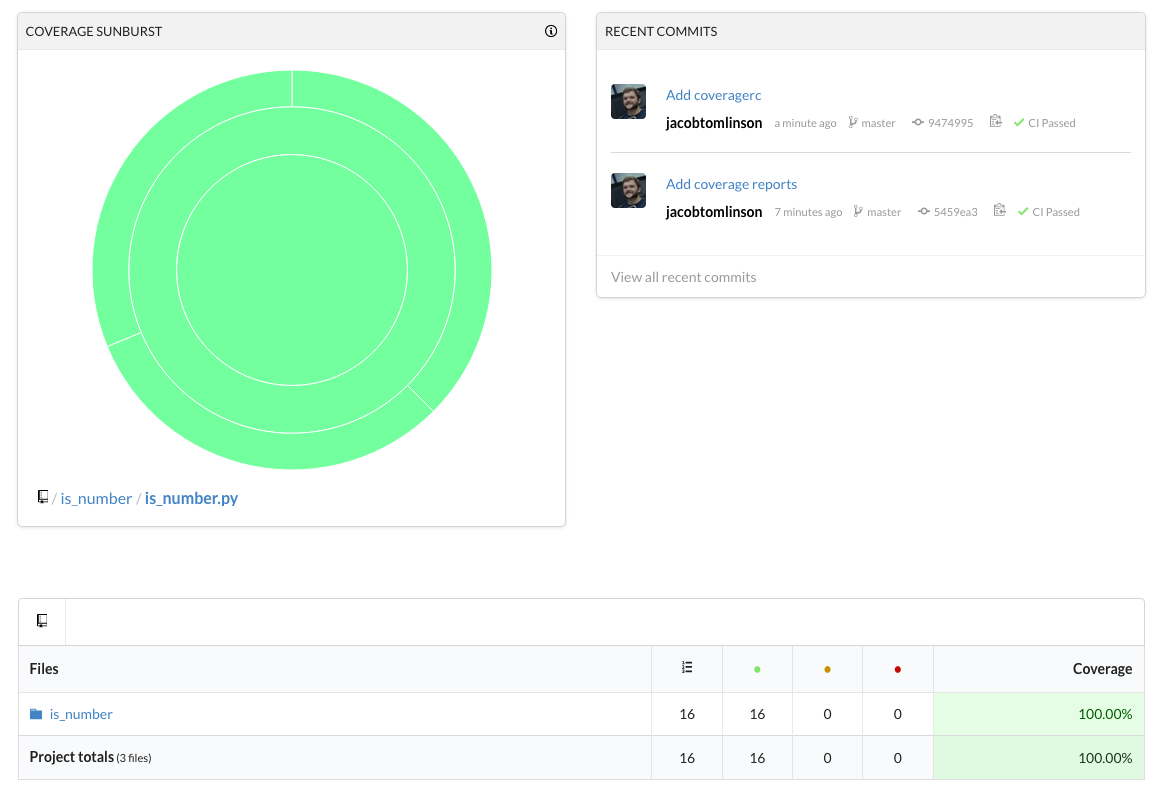 Codecov will also run as a check on your pull requests.

For GitHub Actions we are going to use their own badges. So head to the “Actions” tab in your repo and select the CI workflow from the list on the left. Then on the right hand side click the three dot menu dropdown and select “Create status badge”.

A box will pop up with a markdown example, but as we are using RST just copy the URL for the badge.

Then open your README.rst file and under the existing image directive for the PyPI badge add a second one that looks like this.

Do the same for the pre-commit workflow.

Then let’s head to shields.io to generate a badge for our coverage. In the search box enter codecov and choose the regular Codecov badge. Choose gh from the VCS dropdown and enter your org and repo name. You should see a preview of the badge below. Click the “Copy badge URL” button and then construct an image directive like so.

Now commit your changes, push them up to GitHub and check our your new README badges.

This was part 7 in the Creating an open source Python project from scratch series.

Next up, Automating releases of Python packages with GitHub Actions