Building a contributor community for your open source project

This is part 12 in the Creating an open source Python project from scratch series. If you haven’t read the previous parts you may want to go back and check those out.

With our open source project published on GitHub we probably want to allow folks to contribute changes. Some users of the project may find bugs, or desire extra features and will open issues to tell you. Users who have the skills required to make that change can open a Pull Request on GitHub to propose it. As the maintainer you can then review and merge those changes.

In this post we will discuss things you can do to make your project more approachable for contributors.

To get help with your project we want to make sure we provide guidance for contributors on how to do things. Even if you don’t have strong feelings about how folks should go about contributing and are happy for things to be done the usual GitHub way it’s best to write that down in a documentation file.

We already made a start on this in earlier posts when we documented how we lint, test and release our project. It’s really important to document these things just for your own use, because you will forget! But these notes are now the foundations of our contributing guidelines.

GitHub recommends you create a CONTRIBUTING file either in the root directory, docs/ directory or .github/ directory of your project. Let’s do this for our sample is-number project. The case and extension of the file doesn’t really matter, so given our documentation is in rst let’s create a file called docs/contributing.rst. To start the file let’s move the Developing and Testing sections from our README.rst to this file.

We also need to include this in the table of contents in docs/index.rst. I’m going to create a second toctree section with the title Developer so we can separate our our user documentation from our developer documentation.

Now if we run sphinx-autobuild docs docs/_build/html we can preview our new documentation section. 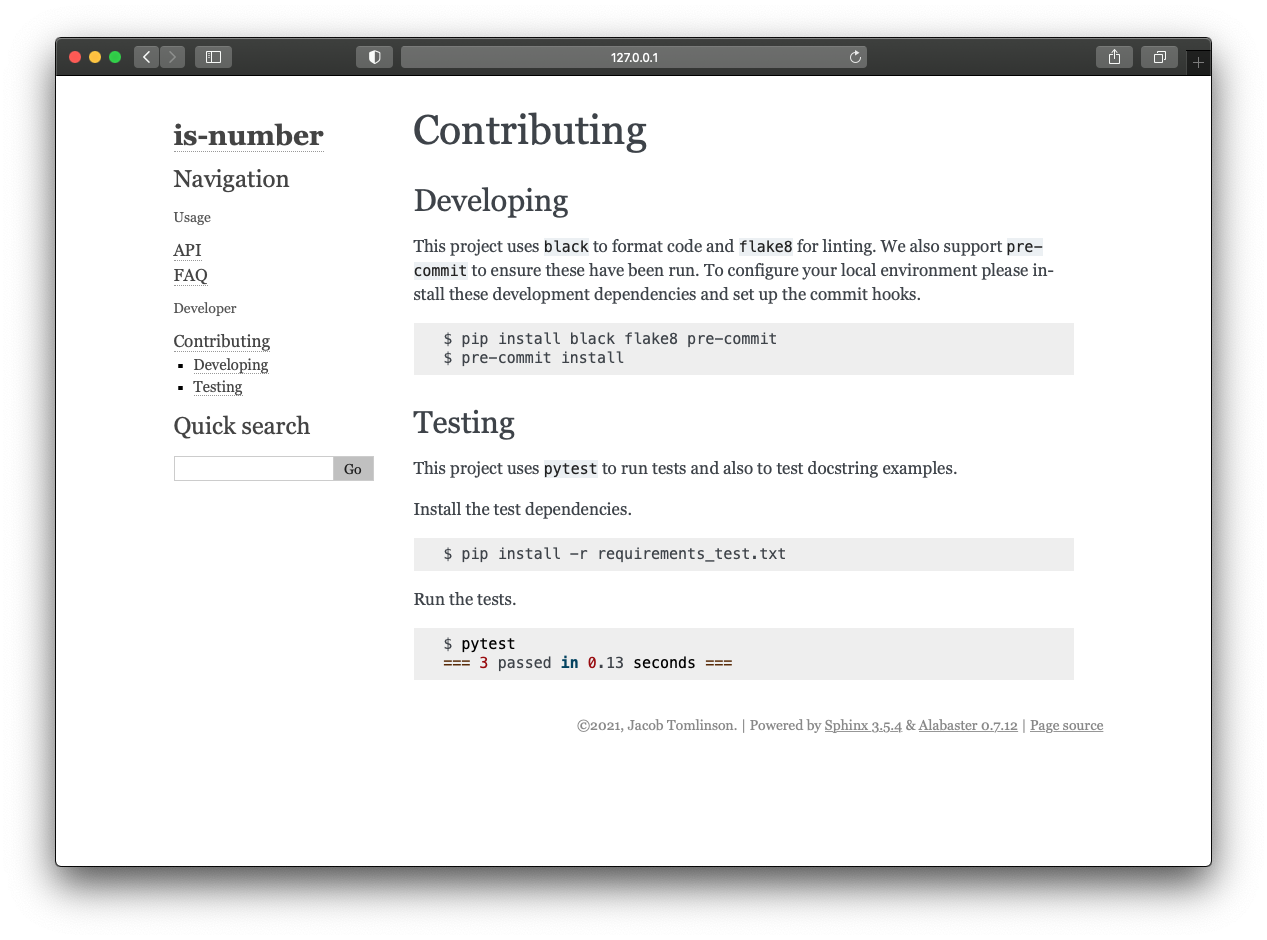 This is a good foundation for our contributing docs, but we can add more.

Folks are going to read this documentation for a couple of reasons. First is folks who want to make a change and are looking for the “correct” way to go about things. The second group are folks who just generally want to contribute, but don’t know where to start.

We want to make both of these groups feel welcome but also lay out the rules that they should follow to ensure they are submitting a quality contribution which can be reviewed easily. We then need to ensure they have all the information they need to get their local development environment set up and make changes which will pass our CI. Lastly we should talk them through how to make the pull request.

My preference is to assume that the contributor is competent enough with Python that they can make changes to code, but that they have a bare bones or minimal local setup. I also tend to assume we are using the CLI but provide enough context that IDE user’s should be able to translate the steps to their tools. When writing documentation like this I often create a new conda environment containing just Python conda create -n env-name python -y and then walk through the steps to ensure I can get tests passing.

Here’s an example of how we can update our contributing.rst file to cover all of this.

Let’s recap the changes we’ve added to the file here.

When you first start out these will likely just be notes for yourself, but as your project grows you may want to give maintaining power to others and so it’s great to have things written down.

Let’s create a docs/maintaining.rst file with some basic review guidance. We can also move the Releasing section from our README.rst here.

Make sure you add this new file to the toctree in docs/index.rst. 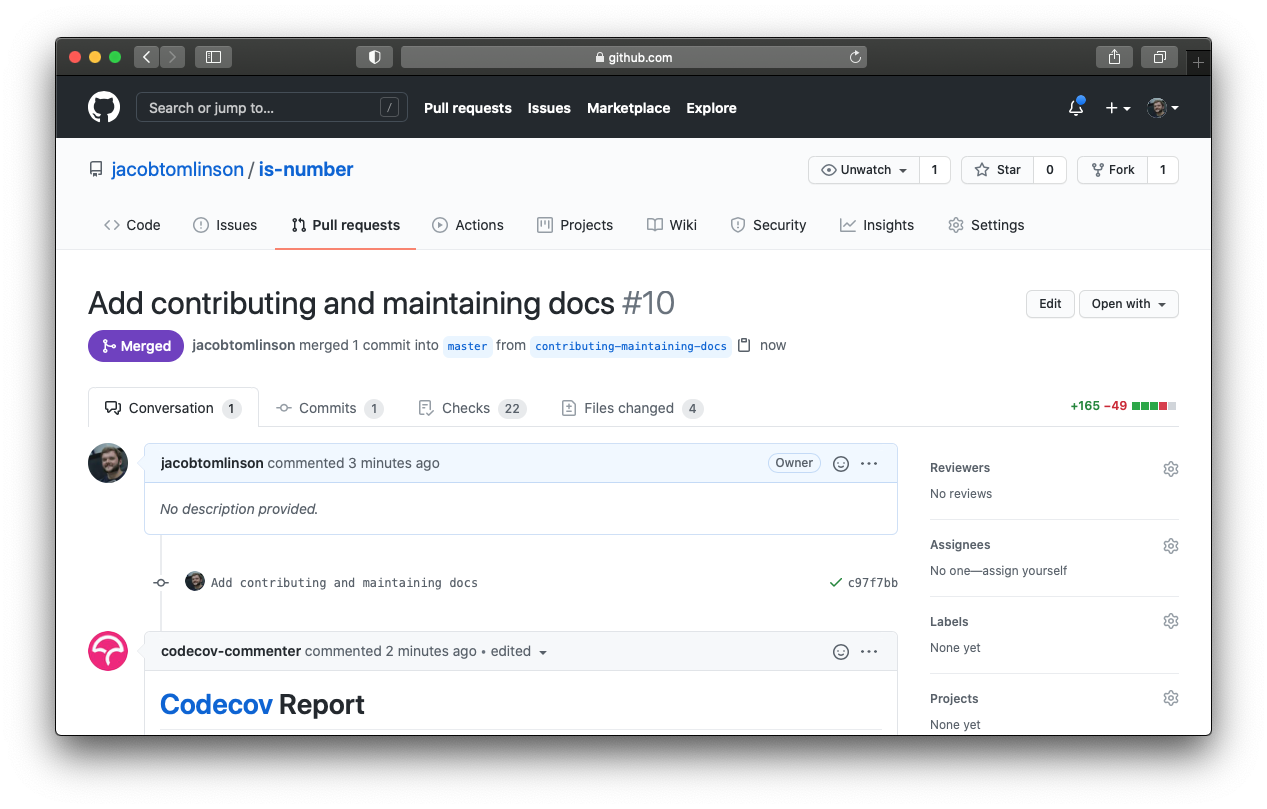 With our changes merged we can see GitHub will add links to our contributing documentation in various places including the bottom right when users open a new issue. 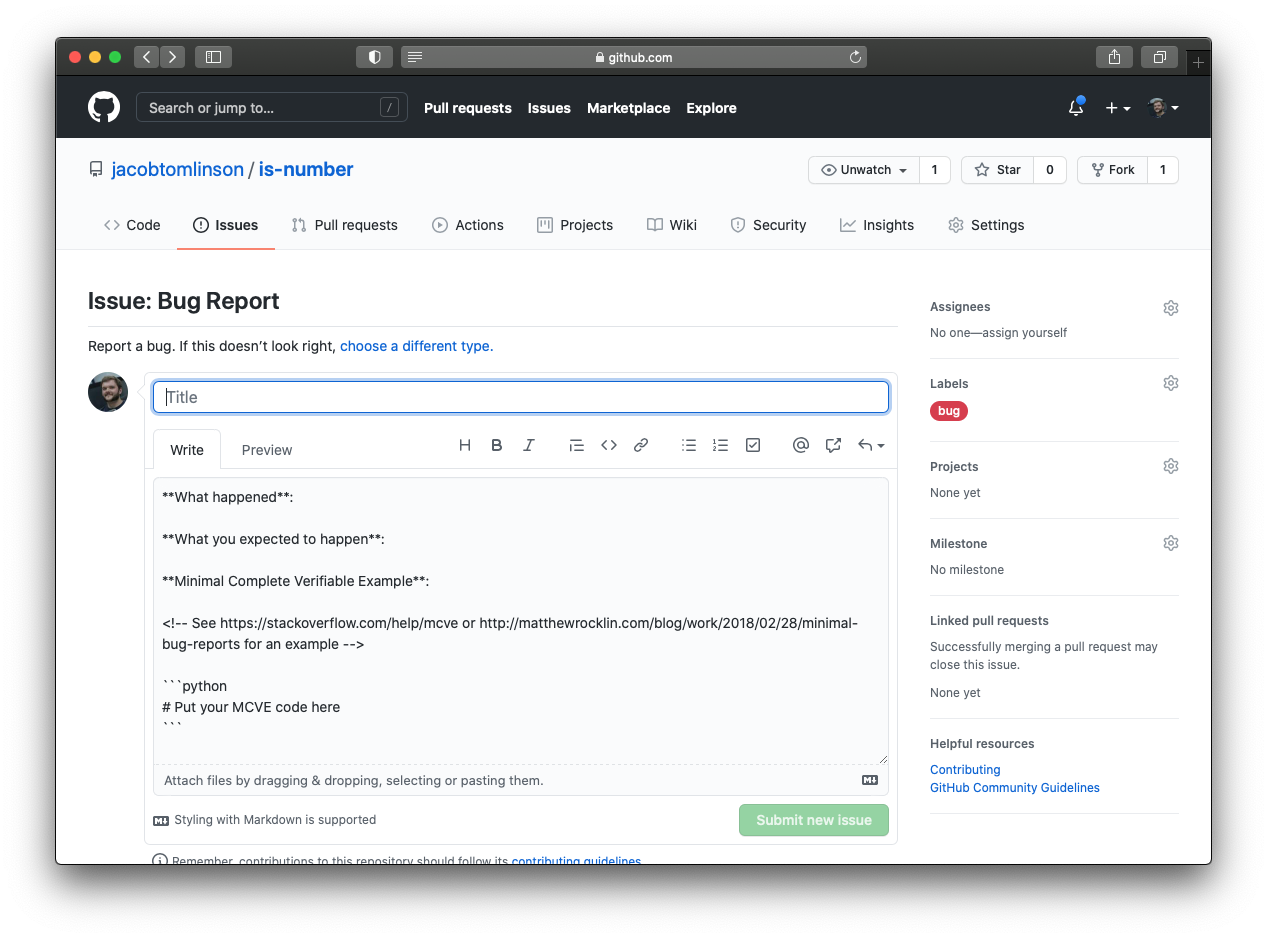 Now that we’ve set out guidance for our contributors to follow let’s try and make this as easy as possible.

We should assume that not everyone raising a PR will have read our contributing.rst documentation, so let’s add a Pull Request template to point them to that file and give them a framework to fill in.

This is pretty much the same as adding an issue template like we did in part 10 of this series.

We need to create a new file called .github/PULL_REQUEST_TEMPLATE.md with the following contents.

Now when a user raises a pull request the body will be pre-populated to help them fill in all the info we need. 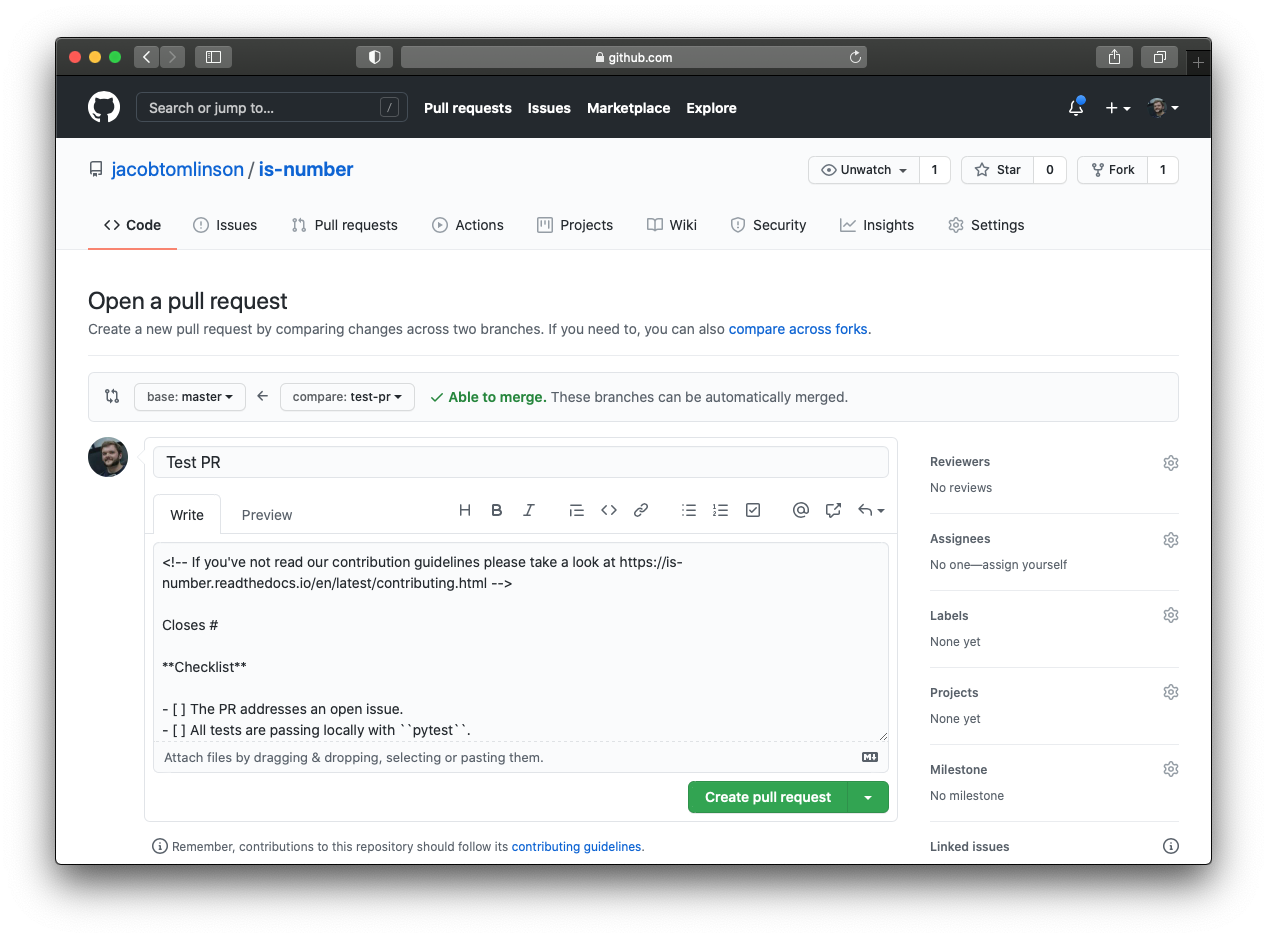 This was part 12 in the Creating an open source Python project from scratch series.

Next up, Branding your open source Python package