Well it’s been quite a while since I’ve written a post on here but due to a suggestion from a friend I’m going to try and make an effort to write more about the projects I work on and the random thoughts that fall out of my brain. A few things have changed since my last post but the main thing would be my job. I am now a software test analyst, aka that guy who has to pick fault with your hard work. I’m enjoying this position and it is actually quite nice finding bugs and knowing you’re not going to have to be the one that fixes them.

So what better way to get back into writting my blog posts than to have a rant about something.

As most of the programs I am testing are inherently web based I find myself using a vast array of browsers. Now I have no issue with different companies releasing different browsers and I appreciate that everyone has there own personal preference. Personally I am a Chrome fan at home, a Firefox fan at work. I do also have strong beliefs that Internet Explorer users should have their PC’s taken away and be locked in a sewer for their remaining years but that’s not what this post is about. The main issue I have with browsers is the huge number of different versions floating about. IE is definitely the biggest culprit of this but the others aren’t too much better. 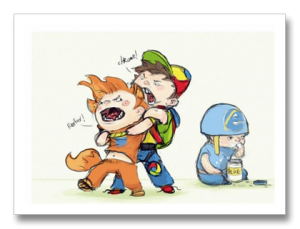 Chrome seems to be the smart one by imposing non-optional updates and firefox seems to have caught on and implemented the same idea in it’s latest release, however these features can be switched off. Safari does prompt you to update with the apple update tool and opera and IE do prompt you too but you don’t have to listen and in my experience a lot of people tend to ignore update windows when they appear. Due to this there are a lot of people out there with old, even obsolete, browsers still running on their pc’s which not only causes issues to web developers moving the industry forwards but also lessens the users experience of the amazing world wide web.

Just because I don’t use Opera or Safari and refuse to touch IE without crying (ironically this is being written in IE due to me being on a new machine and our admin is taking his time getting firefox installed for me) doesn’t mean that they are not needed because if there was no competition there would be no progression. But really and truly the browser war isnt between 5 factions but seems to be between 5 tirbes in each of the 5 factions fighting each other as well as the other factions. So my plea to all browser manufacturers is to make updates mandatory and not optional, that way everyone will be current and the browser war will push things forward with the need to create a new, faster, better, prettier internet due to the need to compete with each other rather than the current need to stay the same for the sake of backward compatability.